You know how you get swept up in something and you don't even know how it started? That's pretty much what happened with me and Lois, the corpse flower. I know a couple of weeks ago I saw or read a story about the Houston Museum of Natural Science having a corpse flower that was beginning to bloom. And the next thing I know, it's been two weeks and I've spent a couple hundred hours in front of my computer watching a webcam of a flower.

To be fair, it wasn't as much as the flower blooming in super-slow-mo that kept me watching. It was the tweets being broadcast to the side of the webcam. It combined people watching with tweeting. How awesome is that? And took me from about 100 tweets on July 1 to the 628 I have now. I'd say at least 450 of those were about the corpse flower.

Originally, the museum estimated it would take a couple days to bloom. They started staying open 24 hours a day so everyone that wanted to could see her. I absolutely love the museum and think it's awesome they were willing to work so hard to accommodate everyone in Houston (and the people that came from even further!). When the webcam went live, the name of the page was "Our Corpse Flower "Lois" is Blooming!" and it kept saying that and no bloom! So I jokingly tweeted that the museum should rename the page to "Our Corpse Flower 'Lois' Might Bloom in the Next Decade." And then did! At least for a few minutes until I could get a screen shot. Hilarious!

I also took the time out of my oh-so-busy schedule (I couldn't even type that with a straight face) to draw a picture. I have made similar pictures for some friends regarding events and stories going on with us, but that's another story. 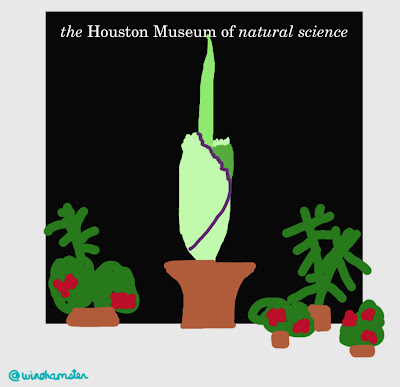 The museum retweeted the picture and I'm not going to lie, it pretty much made my day!

I wanted to see the flower but not until it had released it's pungent corpse-like smell. (That's a phrase I don't think I'll ever use again.) Lucily for me and a couple thousand others, the museum put up a Stink-O-Meter so we could track her smell. Lois peaked in nastiness on Friday morning so we headed to HMNS on Friday evening to wait in line to smell a funky flower. It took a little more than an hour to get from the end of the line to the exhibit. 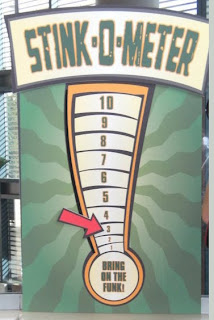 Sidebar: There are WAY too many roaches in the Cockrell Butterfly Center. Ick!
But back to Lois. Here are a couple of pictures I snapped.

When you walked into the room where Lois was temporarily living, you could barely smell anything. Once you got to her "good" side though, you got a big whiff of funkiness. It wasn't a very strong smell since she was already on the decline, but it definitely smelled bad!


And of course I had to draw an updated picture of Lois once she bloomed (complete with Stink-O-Meter). 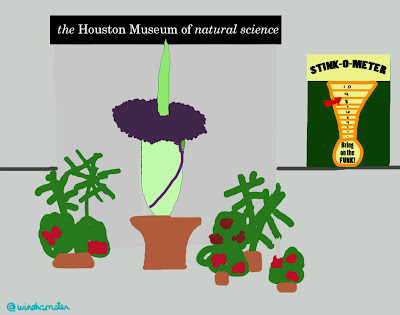 I have some more thoughts and experiences to share but I'll save that for another blog post likely to be titled "The Nerdiest Thing I've Ever Done."
Posted by Karen at 2:07 PM 4 comments: Links to this post

So last week I was illegally watching them on the internet. I decided to go ahead and pay for the last 6 episodes since it's the right thing to do and I could watch them as fast as I wanted. But of course, after I waited 30 minutes for them to all download, each one was skipping! Dammit, computer, I paid $1.99 per episode for that.

I think it's just another sign I need to buy a new laptop. I spent 15 minutes reading Apple's website and random Mac forums trying to figure out what was wrong but after disabling a bunch of stuff, it was still being stupid.

Today my laptop went all nuts while I was trying to play Family Feud on Facebook.  It's almost four years old so I am not all that surprised but I'm still annoyed. I want a new laptop. I want one that's lighter and I don't have to position the AC adapter cord in a certain way to use it. But I don't really want to spend the money on it.

Back to Dexter, I won't spoil anything if you haven't watched it, but what.the.fuck was up with that ending? Ugh! Hurry up September.
Posted by Karen at 9:06 PM No comments: Links to this post

I'm trying to illegally watch Dexter Season 4 on the internet and I found it on some website that limits how much you can watch per day. So, I'm currently waiting 41 minutes to finish episode 4. Purchasing the rest of the episodes on iTunes is starting to sound like a good plan.

I've been reading a lot of blogs lately and I'm totally jealous how awesome they are. But you know what, the bloggers actually update their shit. I know, crazy, huh? So, here I am. With nothing to offer.

Not much else going on in the world of lazy. Except I might have to burn my upstairs neighbors apartment down (yes, I know what will happen if I do. It's a figure of speech. Maybe). A woman that weighs about 110 pounds and a little girl that can't be more than 2 live above me. And they are some noisy motherfuckers. I don't even know how they can be so loud. Before I saw who moved in above me, I as convinced a really fat guy moved in. Nope! They stomp until after midnight. I'm usually awake but it's still really annoying. Don't little kids need sleep?
Posted by Karen at 9:46 PM 3 comments: Links to this post