The Pioneer Woman Travels to Houston

We all know I love the internet. And my computer. I mean, that's where all my friends live. ;) One of the neat and slightly odd things about the internet is that you can know all kinds of things about a person you've never met. Like how she met her husband or what her kitchen looks like or how she feels about mushrooms. Things that 20 years ago you wouldn't know about someone without having met them or having a gossipy grandmother that had.

The Pioneer Woman is one of those people I know all kinds of things about and had never met. She writes/blogs about her "decade-long transition from spoiled city girl to domestic country wife." I find her fascinating and funny and feisty many other words that start with F and end with Y. Especially friendly. Pioneer Woman aka Ree Drummond took her witty writing and recipes from the web to paper. She wrote a fabulous (I swear, I didn't do this on purpose but I cannot stop using F adjectives) cookbook. You can buy it at any bookstore. The cookbook came out a few months ago and she's currently on a book signing tour.

She stopped in Houston this past Saturday and I headed out to meet her with some of my other internet-turned-real-life friends. My friends Reneé, Natalie and Kristen introduced me to the Pioneer Woman's blog a while back. Reneé, Natalie and I (along with N's sister and adorable daughter) met up at Georgia's Market to meet Ree.

Reneé and I went to Blue Willow Bookshop on Tuesday to pick up a pass to stand in line and meet Ree. I purchased by book from Blue Willow and they offered me a pass to the yellow group for buying my book through them. I declined and took an orange pass so I could hang out with Reneé and her friend Nicole. The ladies at Blue Willow were so freaking nice. I wish their shop was a little closer to where I live. The store is so neat and it turned out to be way too small to host this event so it was moved to Georgia's Market which was just a short drive away.

They had a dutch oven (it looked like a le creuset -- WANT) out and some papers so you could ask Ree a question. They selected several questions to ask and then she let people in the audience raise their hands. Reneé worked that to her advantage and asked two questions. One about the worst thing PW had ever cooked and then one about another book about Ree and her husband's courtship. You know, I don't think I've ever used that word before. Courtship. Weird.

Reneé and I totally lucked out in getting a seat. Natalie did us a huge favor and saved us seats. Now, the seats were tiny. I sat down and wanted to take my coat off and I felt like Chris Farley in Tommy Boy. Fat guy in a little coat ... Natalie was reminded of Friends. "Could these chairs BE any smaller?" But everyone around us was super nice and chatty.

Here's Ree answering questions in front of a bunch of organic rice milk. 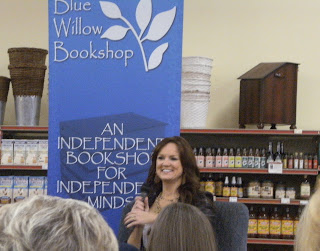 After the Q&A session, they started calling colors for signing passes and we waited for our turn to have our book signed. We were in the fifth color group. Not only did she sign every book (and some people had more than one), she chatted wit 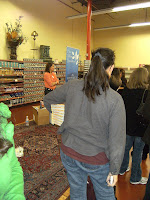 h every person and posed for a picture. The girl in front of me had several books. I would have felt bad for bringing more than one but Ree just smiled and signed and chatted away. That probably says more about Ree being a nice person than me being a nice person though. If I was the one signing books, I'd be thinking "seriously? You want me to sign all of these?"

Reneé, Nicole and I were the first three in line for the orange group. Ree told Reneé she liked her outfit that everyone was so dressed up and asked if that was normal for Houston. Reneé is usually dressed well but we had attended a Christmas party before the signing so she was all Christmas-y in her green sweater and heels.

I went next. Here's me and Ree (we're on a first name basis now) 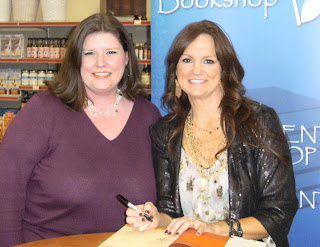 OK, a couple of things. She said she liked my laugh and it was infections. And then in true Karen-talks-too-much fashion, I told her that my nickname in college was Flipper because people think it sounds like a dolphin. And she said she'd never have thought of that and I said something like "well, that's not the worst thing I've been called."

I meant in relation to my laugh (which someone I didn't know once said it sound like a turkey). But that's not how it came out at all.

And secondly, I have got to start taking flash pictures in shirts before I leave my house. Hello, beige grandma bra. I see you. 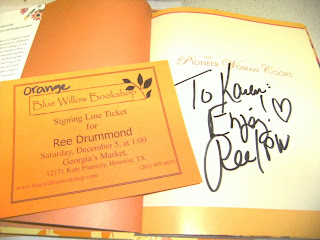 I also got a t-shirt. It's an adorable brown tee with flowers and whatnot. The woman handing them out was nice enough to ask if I wanted a medium or large. They are cute little baby-doll type tees. Yeah, I will totally take a medium. (In fact, the large is about 3 sizes too small but it's so cute and I am working on slimming down so hopefully I'll be able to wear it in the next 3-5 years.)

When I was trying to take a pic of my book, Pan had to get in on the action: 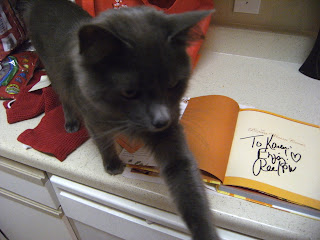 I'd like to say he was waving but actually he was trying to attack the wrist strap on my point and shoot camera.

The whole experience was great. I got to hang out with some girlfriends that I don't see enough. The bookstore/venue had everything organized so well and we really didn't have to wait that long. Ree was wonderful, of course. And I ran into some ladies, er people, I hadn't seen in years. -- I'm just not ready to call people my age "ladies". Maybe when I'm 40 that will sound less weird.
Posted by Karen at 8:16 PM 2 comments: Links to this post

My cats make me laugh

Pan is super entertaining. He freaks out if a baby cries on TV. He has been "fighting" with this cat that keeps showing up on my porch. I have yet to get a video though because that cat only shows up at 8 a.m. And if I'm home at 8 a.m., I'm in bed.

Here's Pan. He's unamused by me.

And her's a bad quality video of him trying to sleep. He did this for about 10 minutes. I filmed it with my phone because I was afraid to move and he'd stop.


Katanna is also unamused by me.

She loves my suitcase though (bad quality pic but still cute)

Posted by Karen at 2:06 PM No comments: Links to this post

Email ThisBlogThis!Share to TwitterShare to FacebookShare to Pinterest
Labels: cats

I have zero motivation. I don't want to do any work. I'm here. I've got all of the programs open that I need. I have coffee and diet coke available.

But I just can't get motivated. I don't know what's wrong. I know that no one else is going to do the work. And the more I put it off, the more stressed it'll make me to do it. But I've got Target.com open, blogger open and I've played Bejeweled Blitz for about 30 minutes today.

I even tried to give myself a stern talking to but I got about 3 words in and decided I didn't have the motivation for that either.

I'm going to have to work over the weekend if I don't get busy. There is a scene in Boogie Nights where Philip Seymour Hoffman keeps hitting himself in the head and saying "stupid, stupid, stupid".

That's me right now.
Posted by Karen at 2:33 PM 2 comments: Links to this post